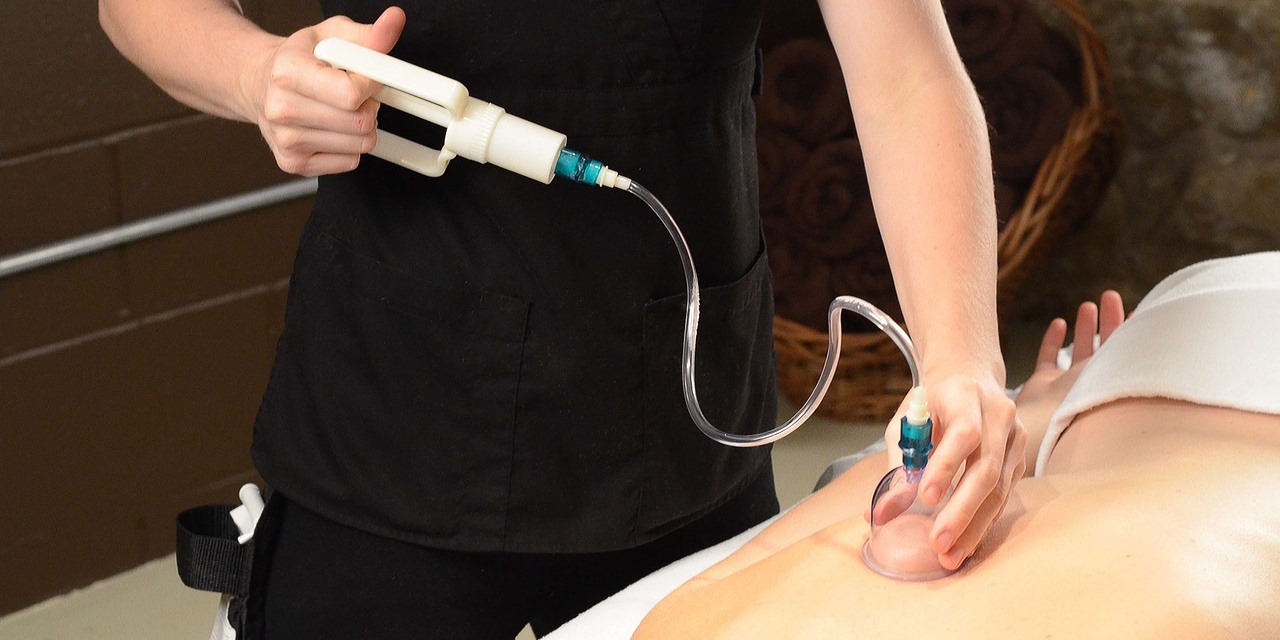 Cupping therapy, also known as Cupping massage, is a type of traditional medicine by which local suction is created on the skin. Little cups or pots of glass, bamboo, bronze, buffalo horn, copper (or plastic, nowadays) are placed on the skin to create a vacuum by which the skin and upper muscle layers are pulled up.

The vacuum is created by heating the air in the cup (exhausting the oxygen), or by use of a mechanical pump (mechanical withdrawing of air). The cups are typically left on the designated location for about five to fifteen minutes.

Although the origin of cupping is rather unclear, it’s known to have been in use for at least 3,500 years already.

It is mentioned in Egyptian papyrus rolls from around 1550 BC, and in ancient Greece, cupping was mentioned around 400 BC by Hippocrates. It was later recorded to have been used in the Muslim empire, finally also reaching modern European civilizations.

Without doubt today, it’s very popular in China (often thought to be an original Chinese healing technique) and it’s considered a formal healing modality within Traditional Chinese Medicine (TCM) since 1950.

In past decades, cupping therapy has seen an increase in Western countries also, in TCM, complementary and alternative medicine practices.

The general idea of cupping is that it stimulates blood and lymph circulation in order to alleviate colds, treat respiratory diseases, like pneumonia and bronchitis, treat skin-issues, stimulate the immune and nervous system, loosen up muscle knots, and relieve pains.

In Asian countries there’s the additional idea of stimulating the free flow of Vital Life Energy (Qi, Chi, Prana), and in some other cultures it is also used as a means of “purification” having a spiritual or religious goal.

Typically, cupping is done on the back, neck, and shoulders, but it can be applied on other regions of the body as well.

In this post we consider that there are three main types of cupping methods known: Fire Cupping, Wet or Blood Cupping, and Dry Cupping. Mind that this is just one type of classification.

Today, you will also find cupping specializations, such as facial, abdominal, female, and male cupping treatments.

Fire Cupping
With fire cupping the cup is heated inside with a flame to burn the oxygen and create a vacuum in the cup. It’s then quickly placed on the skin to create suction of skin tissue and the superficial muscle layers.

Sometimes, massage oil is applied to have a better seal, but also to make the cups glide over muscle groups to massage the body. This is also called “gliding” or “sliding cupping.”

Wet Cupping (Blood Cupping)
To apply blood cupping (also called medicinal bleeding), first a small incision is made in the skin to draw blood to the surface by suction. The remainder of the procedure is as with Fire Cupping.

Blood cupping is specifically aimed at draining out impurities in the body, notably toxins, and to combat skin problems.

Dry Cupping
Dry Cupping follows the same procedure as Fire Cupping except that no flame or other heat source is used. Typically, a vacuum is created by using a pumping system. With Dry Cupping massage, sliding and gliding can be applied also.

Round dark or red areas or circles and stripes (the latter when used in combination with massage, gliding or sliding) may appear at the places where the cups were located or moved because of the suction and capillary rupture just under the skin.

The marks mentioned above will disappear within one day to several weeks, depending on the client’s physical reaction and the intensity of treatment.

With Fire Cupping burns can occur. Cupping is not advised with pregnancy, extreme fatigue, cancer, and blood coagulation issues.