Although Thailand offers a great deal of options when it comes to transportation, it can sometimes be difficult to find your way, or even to be aware of all the options available.

Thailand is quite a big country, with particularities and differences between the cities and regions, but in this chapter we focus on the transport options in Chiang Mai, the go-to city for those wanting to study Thai Massage in Thailand.

Taxis in Chiang Mai will mostly stay put at the airport or train station waiting for the newly arrived, or around touristic places. Apart from that, if you need one, the best option is to ask at your guesthouse to call one for you.

Tuk-tuks are available almost anywhere and are a quick and practical way of getting around Chiang Mai. However, they are often more expensive than other types of transportation (like buses and Songthaews) and with every passing year the set prices are harder to bargain with. The unadvised tourist can get scammed by them pretty easily.

The Samlors are Thai Rickshaws usually driven by old men trying to make a few bucks with tourists who want to be taken around for a spin around the old city. They can be found mainly around the Warorot Market.

There is a public bus service within the city, which is in fact the cheapest way to get around in Chiang Mai with a flat rate of about 20 baht.

However, they are not much used by tourists by the sheer lack of information available, as it’s difficult to know where the bus stops are and the language barrier makes everything worse. That’s why most Farangs (foreigners) find it much easier to just pay a taxi or tuk-tuk than to go hunt down the cheap bus.

But if you’re traveling on a budget, just ask around, there is even a route that goes from the airport to the old city. You may lose some time trying to find information, but it will definitely save you some baths (Baht is the Thai currency).

The Songthaews are a popular means of transportation in Thailand, being essentially a pick-up truck adapted to carry passengers at/in the back of the truck.

In Chiang Mai, the most common ones, that run in the old city, are known as the “red trucks.” Although their route is hard to know beforehand, you can just tell the driver where you want to go and see if he’ll go to the same direction – if the Songthaew is empty he’ll probably just change his route to take you, taking other passengers along the way.

They are virtually everywhere to be found, to get one just hail on the street and they’ll stop for you. You can also rent one privately for the day, if you’re with friends it can be worth it.

Motorcycle taxis are quite widespread, not only in Chiang Mai, but in the whole of Thailand. It’s a cheap and fast way to get around, if you don’t mind the adrenaline rush, as they usually drive fast and not so carefully.

Renting a motorcycle or scooter is also a popular choice among tourists. It can be done almost anywhere and it’s quite cheap. To rent one you will often need to leave your passport as collateral, but some agencies also offer the option of leaving a down payment of 2,000 or 3,000 baht instead.

By Thai law you are required to have and show your driver’s license as well, but the agency will most likely not care about that at all. Just be sure to always wear a helmet, even if most Thais don’t wear them and get away with it, be sure that the laws are much stricter for foreigners – if you get stopped by an officer without carrying a helmet, or without your drivers license, be prepared to pay.

Also, remember that the traffic in Thailand is quite chaotic and dangerous, and usually there’s no real “insurance” when you rent your scooter. Plus, if any sort of accident happens you’ll be the culprit no matter what, just for being a foreigner, so be advised.

Bicycling is a popular way of getting around the city, unlike basically all other cities in Thailand. Probably due to the high concentration of Farangs who are used to biking in their home countries and the fact that the inner city of Chiang Mai is relatively flat-terrain.

Renting a bike in Chiang Mai is quite easy and there are many options, from bike shops (about 50 baht per day) or using the bicycle hire stations spread around the city.

Sometimes your guesthouse will have bikes available for free for their guests as well.

As there is so much too see concentrated within the walls of the Old City, walking is a great option to go exploring the city. It’s quite safe, as in the rest of Thailand, and it gives you more time to appreciate and take in all the beauty and cultural diversity around you.

Grab is basically an Asian version of Uber, being available in all major cities (and even on some islands) in Thailand. It can be very useful, being cheaper than a taxi or tuk-tuk and especially handy at night where there are no (or very limited) Songthaews available.

Last but not least, you can always rent a car, particularly if you are with your family or plan to visit the countryside of Chiang Mai and don’t want to do it with a tour agency.

If you need a car when you arrive at the airport, be sure to book in advance to get your car at one of the agencies available there. If you are not in such a hurry, in the old city you’ll find plenty of car hire agencies with better rates to choose from. Beware that in Thailand they drive on the left side of the road. 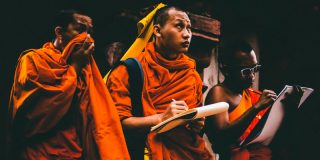